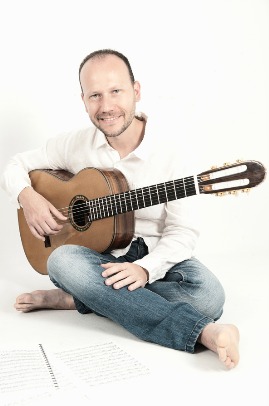 Pablo Rioja is a professor at Conservatorio Profesional de Música Federico Moreno Torroba, a position he combines with an intense performing career.  He has offered recitals in numerous halls and festivals around the world, such as the Círculo de Bellas Artes in Madrid; the Abu Khater Auditorium in Beirut; the Carzou Foundation in Manosque (France); the Château de Grandson (Switzerland); the Le Bois qui Chante Festival in Chateau d'Oex (Switzerland); Mesukeskus in Helsinki (Finland); the Cervantes Institutes in Marrakech, Tangier and Lebanon; the Auditorium in Logroño and the Pablo Gargallo Museum in Zaragoza.

Proof of his passion for chamber music is the creation of several ensembles: Cameristas Alternativos, devoted to the research and performance of chamber music with guitar; the guitar duo L´Encouragement, with Herminia Navarro Rivera, and the violin and guitar duo Animacorde, with Andrés Ortiz.

Born in Madrid, he studied chamber music with Rocío Samper and the guitar with Luis Briso de Montiano. In the year 2000 he finished his studies with distinction at the Real Conservatorio Superior de Música de Madrid under Prof. Miguel Ángel Jiménez. In 2009 he completed his musical training at the II Master in Classical Guitar of the University of Cáceres (Spain) with internationally acclaimed guitarist Ricardo Gallén.