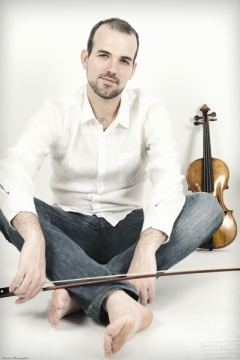 Andrés Ortiz performs regularly as a soloist and as a chamber musician in numerous halls in Europe and the United States, such as the Chicago Cultural Center (Myra Hess Memorial Concert Series), the Phillips Collection in Washington DC (Sunday Concerts), the Yamaha Salon in New York, the Château de Grandson in Switzerland (Les concerts de Grandson), the Le bois qui Chante Festival in Château d'Oex (Switzerland), Messukeskus in Helsinki (Finland), the Palau de la Música in Valencia, the Círculo de Bellas Artes or the Fundación Juan March in Madrid, among others.

He has made live recordings for Radio Télevision Suisse, WTFM Chicago, the Phillips Collection in Washington and Yamaha Artist Services in New York.

He has premiered works by important composers such as Tapestries and Nonsenses for violin and guitar by Tomás Marco, Partita II for solo violin by Tomás Garrido -dedicated to him by the composer- and the Trio Música de Cítaras by Jorge Taramasco.

As a member of the Gustav Mahler Youth Orchestra, he has performed under the baton of Sir Colin Davis and Herbert Blomstedt at some of the most important halls in Europe, such as the Royal Concertgebow in Amsterdam, the Royal Albert Hall in London and the Musikverein-Grosser Saal in Vienna.

He plays regularly with guitarist Pablo Rioja, with whom he forms Animacorde.

Born in Madrid, he studied at the Escuela Superior de Música Reina Sofía, where he obtained the Prize to the Best Chamber Music with Piano Group handed by her Majesty Queen Sophia of Spain; the Hochschule für Musik Detmold (Germany), and the Guildhall School of Music and Drama in London, with scholarships from the Spanish Ministry of Culture, the Community of Madrid and the Isaac Albéniz Foundation. Among his teachers are Santiago de la Riva, José Luis García, Lorenz Nasturica and Simon Fischer, as well as Rainer Schmidt and Marta Gulyas and Eldar Nebolsin in the field of chamber music.

He develops his devotion for teaching with his position as Violin teacher at the Mater Salvatoris Professional Music School and co-director of the Centro para la Pedagogía de los Instrumentos de Cuerda (CEPIC) in Madrid.